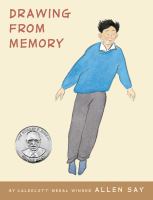 "Caldecott Medalist Allen Say presents a stunning graphic novel chronicling his journey as an artist during WWII, when he apprenticed under Noro Shinpei, Japan's premier cartoonist. Drawing from memory is Allen Say's own story of his path to becoming the renowned artist he is today. Shunned by his father, who didn't understand his son's artistic leanings, Allen was embraced by Noro Shinpei, Japan's leading cartoonist and the man he came to love as his "spiritual father." As WWII raged, Allen was further inspired to consider questions of his own heritage and the motivations of those around him. He worked hard in rigorous drawing classes, studied, trained--and ultimately came to understand who he really is. Part memoir, part graphic novel, part narrative history, DRAWING FROM MEMORY presents a complex look at the real-life relationship between a mentor and his student. With watercolor paintings, original cartoons, vintage photographs, and maps, Allen Say has created a book that will inspire the artist in all of us"-- Provided by publisher.
Publisher: New York : Scholastic Press, 2011.
Edition: 1st ed.
ISBN: 9780545176866
0545176867
9780545176873
0545176875
9781451715460
1451715463

A Caldecott Medalist presents a graphic novel chronicling his own journey as an artist during WWII, when he was shunned by his father, who didn't understand his son's artistic leanings, but was embraced by Japan's leading cartoonist. (NoveList Plus)

This is a wonderful memoir from Mr. Say, focusing on his preteen years in Japan circa 1950, and his quest to become an artist, even seeking out his mentor, Noro Shinpei. Those were hard times for Japan, and for Say's family, but the soulful, lively illustrations give it a wonderful depth. Also, the title is literal: before leaving Japan for America, young Say burned almost all of his sketchbooks-- most of what you see in this book is indeed drawn from his memory. The young man has ups and downs, but he understands that his life is not like others', and he has both a freedom and a calling that other children lack. A wonderful book about finding your path.

I have read several books by Mr. Say, and have enjoyed most of them. He is a wonderful artist (winner of a Caldecott) and a thoughtful, elegant storyteller. His are "picture books, " but should be of interest to all ages, except for young preschoolers. Many of the books would be especially good for family or classroom reading; generally, for children at the elementary school level. This is longer than most of his other books. "Drawing from Memory" is a graphic memoir about his childhood, education, and apprenticeship in Japan. As the book ends, he is preparing for his move to the United States. Some aspects of this book are culturally and historically specific; major themes, however, are universal. My favorite line in the book is an old Japanese saying: "Let your dear child journey."

Children's author/illustrator Allen Say rebels against his family's wishes to apprentice himself to Japanese cartoonist Noro Shinpei.
He was twelve years old.

Children’s author/illustration Allen Say looks back on the path his life has taken, from being shunned by his father for his desire to draw, to being taken in as a pupil by Japan’s leading cartoonist, to emigrating to America at 16. Graphic novel format.

This was an illustrated autobiography about Allen Say's life from being a young child during WWII until he came to America as a young man. It was very interesting and obviously well-illustrated.

A kid reading this book is going to see firsthand how the decisions they make even at as young an age as twelve can affect their entire life. A memoir as well as a tribute to an old friend, Say's book fulfills its purpose so well that one can't help but hope for a sequel someday. This is nonfiction for kids at its best.

Imagine that you are twelve, you have your own apartment (which your parents pay for), and you get to study comics with a master sensei. Sounds a little bit like heaven, no? Well welcome to Allen Say's world. As a boy growing up in WWII era Japan, cartoons were his life. Unfortunately they were not the kind of thing a serious young man was supposed to study. While living with his grandmother for a time, the older woman came up with a serious proposition. If he studied hard and got into the prestigious private Aoyama Middle School he would be given his own apartment and stipend for food. Young Allen leaped at the chance and before he knew it he had his own pad. Soon thereafter he read a newspaper article about a boy like himself who traveled hundreds of miles to become a cartoonist and was taken on by the great Noro Shinpei. Inspired, Allen also introduces himself to Shinpei and is taken on as well. Through this great man he learns what it truly means to make art, and when an opportunity to go to America comes up, he takes it, never forgetting the man who helped him all those years ago. The book is told through Say's own drawings, both from his past and from his memories today, as well as photographs, comic panels, sketches, and more. An Author's Note in the back explains what happened to his old sensei years and years later.