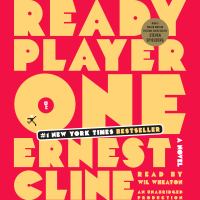 A world at stake. A quest for the ultimate prize. Are you ready?

In the year 2045, reality is an ugly place. The only time Wade Watts really feels alive is when he's jacked into the OASIS, a vast virtual world where most of humanity spends their days.

When the eccentric creator of the OASIS dies, he leaves behind a series of fiendish puzzles, based on his obsession with the pop culture of decades past. Whoever is first to solve them will inherit his vast fortune--and control of the OASIS itself.

Then Wade cracks the first clue. Suddenly he's beset by rivals who'll kill to take this prize. The race is on--and the only way to survive is to win.

"A most excellent ride . . . Cline stuffs his novel with a cornucopia of pop culture, as if to wink to the reader." -- Boston Globe

"Ridiculously fun and large-hearted . . . Cline is that rare writer who can translate his own dorky enthusiasms into prose that's both hilarious and compassionate." --NPR

"[A] fantastic page-turner . . . starts out like a simple bit of fun and winds up feeling like a rich and plausible picture of future friendships in a world not too distant from our own." -- iO9

It's the year 2044, and the real world is an ugly place. Like most of humanity, Wade Watts escapes his grim surroundings by spending his waking hours jacked into the OASIS, a sprawling virtual utopia that lets you be anything you want to be, a place where you can live and play and fall in love ... Read More »

Ready Player One takes place in the not-so-distant future--the world has turned into a very bleak place, but luckily there is OASIS, a virtual reality world that is a vast online utopia. People can plug into OASIS to play, go to school, earn money, and even meet other people (or at least they can... Read More »

Sometimes a not very good book can be a lot of fun to read and I would put this book in that category. The writing is poor and the exhaustive pop culture references can be tedious. Cline uses the cheapest kinds of cheats to get characters out of jams (previously unmentioned items of "inventory" that get used to solve the problem or a particular skill a character has, also previously unmentioned, that is just what is needed.) This is just lazy writing. And, yes, the "politics" are suspect - perhaps a lot more now than when it was written ten years ago. But, despite all of this, the basic plot of the book kept me going and Cline manages to keep a page turning energy to his story. It is junk food for the sci-fi reader. I know, you get no nutrition, but it is fun while it lasts.

As a self-professed nerd, I found this book deeply disappointing. While I will say that Ernest Cline has a knack for creating tension in his writing, the issues I had with the book far outweigh the "fun tone" it tries to evoke.

I agree with the criticism about the lack of plot and excessive references but to me, the real issues are how the book is steeped in gatekeeping, toxic masculinity, homophobic slurs, transphobia, and tropes like "stalking for love" quite frankly the worst and most harmful parts of nerd culture, and does nothing to challenge these ideas.

While there are women in the universe they tend to fall under the "not like other girls" trope is seen as prizes to be won by the male characters or treated like their identities do not matter.
Wade's best friend has a white male character who is revealed to be a black lesbian. Wade reacts with anger that his friend deceived him, instead of empathizing that being a woman on the internet is an existence of violence and harassment and understanding her choice. Then he basically says that he does not care about her identity. He should care that his friend is a black lesbian since these are critical parts of her identity

I would not recommend this book. This is a tired self-indulgent story that in a post-gamergate world is no longer "meaningless fun".

Maybe because I am adult parts of this book were rather boring. I guess the overly detailed descriptions are mostly necessary to explain the situation and scenery so I continued. The last half of the book is much more interesting and does a good job keeping suspense and excitement revved up. Overall a good read for all ages.

Boom! what a unique and involving story. I was head first down the rabbit whole with this one.
What a great lead character. All the 80's references, though while familiar (showing my age) the references had me wanting to watch anime and movies from my childhood.
This is added to "My favorites" shelf belong to my 5/5 reviews.

On a side note - The movie was trash and I'm devastated that I haven't heard one positive thing about Ready Player Two.

When the film adaptation for this book was first released, I decided to read the book before going to the cinema to watch the movie. I spent an entire day reading it from cover to cover, all the while completely immersed. The novel itself is set in a futuristic environment, and revolves around a race to find the secret in a popular online game, with a massive prize to the first player to discover the secret. You’re guaranteed to like it if you enjoy reading about adventures, as the entire book is a large adventure divided into smaller pieces. Also, the novel is packed to the brim with video game references, and reading the book itself feels like playing a game as the protagonist. I’d definitely recommend this book to anyone seeking an adventure, and even to those who have already watched the movie version, as a significant portion of the book’s contents were altered in the film.
Age rating: 12 and up, includes one violent scene featuring a crime

This title is wild

Filled with lots of nostalgia from the 80s and 90s, the audio book is highly recommended, and well worth a listen to. A gang of teens go on an Easter egg hunt for the ages in a virtual reality that may be just the escape you need if your current reality has you craving something else.

Really great book. Loved topic and main character. Very entertaining. Author must be a gamer. His high level of knowledge (at least to a non-gamer) in gaming is amazing. Highly recommend this book. Where can I find a Parzival to fix my computer???

Fantastic book. Good plot, perfect main character, great setting, and good writing. Art3mis is not my favorite as a love interest, but that's just stretching for some criticism. So excited for book two!

bell5133 thinks this title is suitable for 13 years and over

samvar thinks this title is suitable for 13 years and over

reshmitham thinks this title is suitable for 13 years and over

the_axolotl thinks this title is suitable for 13 years and over

mehaanu thinks this title is suitable for 10 years and over

heeyitscassie thinks this title is suitable for 14 years and over

genny1229 thinks this title is suitable for 14 years and over

JackieDaytona thinks this title is suitable for 12 years and over

ElephanteTheSmall thinks this title is suitable for 12 years and over

maddog_ thinks this title is suitable for 13 years and over

“As terrifying and painful as reality can be, it’s also the only place where you can find true happiness. Because reality is real.” - James Halliday (364)

“‘You mentioned that once on your blog. Two years ago.’ I almost cited the date of the actual blog entry before I realized it would make me sound even more like a cyber-stalking super-creep.”

"This ‘girl,’ whom I’d been cyber-crushing on for the past three years, might very well be an obese, hairy-knuckled guy named Chuck."

"Once I’d done my homework on Sorrento, I felt like I was ready to sit down with the devil."

"When it came to my research, I never took any shortcuts."

"... can we adjourn the Mutual Admiration Society ...?

Parzival: "The female of the species has always found me repellent."
Art3mis: "I don't find you repellent."

"I’d heard all the clichéd warnings about the perils of falling for someone you only knew online, but I ignored them. I decided that whoever Art3mis really was, I was in love with her. I could feel it, deep in the soft, chewy caramel center of my being."

Coarse Language: By the 2nd page, there is already some coarse language, but not extremely bad

Coarse Language: Corse language infrequent but makes this book unsuitable for under 13 years.

Coarse Language: The usual swearing when frustrated, nothing out of the ordinary.

This kid is very poor and very alone. Being in this virtual world allows him to escape. He grows up in this society that is falling apart and only wants to find fortune. He stumbles upon his first clue into a puzzle everyone else has given up on. It leads into the most adventurous roller coaster of a lifetime, with plenty of retro 80's to go along with it.

An entertaining read about the 1980's "tech" looking back from 40 years in the future. Pacman, Atari 2600, and Journey are part of a quest through a completely virtual, all-encompassing universe.