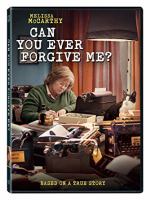 Can You Ever Forgive Me?

Lee Israel made her living in the 1970s and 1980s profiling the likes of Katharine Hepburn, Tallulah Bankhead, Estee Lauder and journalist Dorothy Kilgallen. Though Lee Israel has undeniable profiling skills, her work has grown stale and hackneyed, rendering her profession unnecessary and insignificant. Now in times of financial hardship, Israel must find other ways to make a living. With assistance from her steadfast friend, Jack, the two endeavor to keep Israel afloat. With a dose of trickery and deceptive eye, they do just that.
Publisher: Beverly Hills, CA : Twentieth Century Fox Home Entertainment, [2019]
ISBN: 9786317563742
6317563748

Lee Israel is a washed-up author who turns to forgery in order to keep afloat. Melissa McCarthy and Richard E. Grant play off each other perfectly in this dark dramedy. Rated R.

Lee Israel is a washed-up author who turns to forgery in order to keep afloat. Melissa McCarthy and Richard E. Grant play off each other perfectly in this dark dramedy.

Melissa McCarthy did a fantastic job portraying real-life author Lee Israel who has fallen on hard times and resorts to desperate measures to pay her rent. There's suspense - plus smart and funny dialogue - so you are not overwhelmed by the sadness of Lee's affairs. The focus on famous author memorabilia makes this movie is a perfect fit for bibliophiles. McCarthy was nominated for an Oscar for best leading actress for her work here; Richard Grant was also nominated for his supporting actor role in the film.

I really enjoyed this movie - I loved Melissa's salty humour & potty mouth - she played a great curmudgeon. Loved Richard E. Grant as Melissa's side-kick ....dapper with just the right amount of "Sprezzatura" and a wit to match Melissa's....but what I loved most of all was the music....which unfortunately wasn't released as a Soundtrack ....so I'm hunting the tracks down & compiling my own CD soundtrack. :( ....but it'll be well worth it.

Melissa McCarthy is amazing in this! My heart was pounding for some of it. Crazy that it's based on a true story, too!

I like movies based on true stories. I enjoyed the movie. Melissa McCarthy was nominated for best actress, and I can see why.
Her partner in crime, was very good too. Two very interesting, but sad and sometimes amusing characters.

I have mixed feelings about this film. Melissa McCarthy gave an amazing performance as the cantankerous, lonely writer Lee Israel. Richard E. Grant was also excellent as her enabling friend. Watching Melissa's character struggle with her career and her descent into criminal behaviour was fascinating and compelling. I didn't really enjoy the movie much, however, because the character Lee Israel was so unlikeable and much of her behaviour was so loathsome. So while I found the performances outstanding and I'm glad I watched it, it's not a whole lot of fun. It was very good, but you'd have to be in the right mood to watch this dour, sad film.

I like films ‘based on a true story’. I didn’t know anything about Lee Israel. Melissa McCarthy did a good job being a mean, isolated curmudgeon. It’s curious to me that comedians are put into serious roles. The other side of their comedic face comes out.

I thought this movie was quite good. Melissa McCarthy and Jack Grant were great in it. I had never seen many movies with Melissa and now I am a fan. It had a lot of funny parts. It is a true story.

PS text at the end of the film:

Lee forged and sold approximately 400 letters. Two of Lee's forgeries were included in Noël Coward's 2007 biography. They were removed by the second printing. Nora Ephron sent a cease and desist letter to Lee, demanding that she stop impersonating her on the phone. When summoned for jury duty later in life, Lee replied: "I am a convicted felon and thereby ineligible to serve. Who said crime doesn't pay?" Jack Hock passed away on 10/19/94, having been lovingly looked after by members of the Gay Men's Health Crisis Center. The New York Times called Lee Israel's book: CAN YOU EVER FORGIVE ME? : MEMOIRS OF A LITERARY FORGER a "sordid and pretty damned fabulous book."