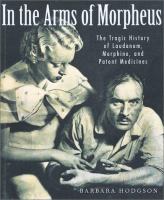 In the Arms of Morpheus

The Tragic History of Laudanum, Morphine, and Patent Medicines

The follow-up to the widely praised Opium , In The Arms of Morpheus is the shocking story of how a simple but bewitching substance, touted as a miracle drug, enslaved unwitting generations of 19th century writers, artists and ordinary citizens. Extracted from opium, the sap of the poppy, this popular drug was welcomed into the homes of rich and poor alike, in the guise of medicinal uses in the form of laudanum and opium elixirs, and as pure, undisguised morphine.

Laudanum contained opium, saffron, cinnamon and alcohol. In the spirit of 19th century progress, other opium concoctions were created and a whole industry in quackery erupted. In both Britain and North America, opium was mixed with everything imaginable: mercury, hashish, cayenne pepper, ether, chloroform, belladonna and whisky, sherry, wine and brandy.

In the Arms of Morpheus examines how the drinking of laudanum for medical reasons developed and how it became an everyday safeguard against pain, poverty, and boredom. Opium eating was catapulted into fame by the confessions of Thomas De Quincy and insinuated itself into the lives and works of writers such as Louisa May Alcott, Lord Byron, Shelley, Elizabeth Barrett Browning, John Keats, the Brontës, Samuel Taylor Coleridge and many others.

Thoroughly researched and copiously illustrated with photographs, engravings, advertisements, movie stills, pulp magazine and dime novel covers and paraphernalia, In the Arms of Morpheus continues the history of opium's emergence as an omnipresent and sometimes devastating influence.

There are no comments for this title yet.