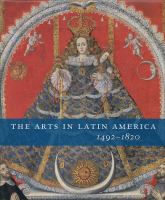 By the end of the 16th century, Europe, Africa, and Asia were connected to North and South America via a vast network of complex trade routes. This led, in turn, to dynamic cultural exchanges between these continents and a proliferation of diverse art forms in Latin America. This monumental book transcends geographic boundaries and explores the history of the confluence of styles, materials, and techniques among Europe, Africa, Asia, and the Americas through the end of the colonial era--a period marked by the independence movements, the formation of national states, and the rise of academic art.

Written by distinguished international scholars, essays cover a full range of topics, including city planning, iconography in painting and sculpture, East-West connections, the power of images, and the role of the artist. Beautifully illustrated with over 450 works--many published for the first time--this book presents a spectacular selection of decorative arts, textiles, silver, sculpture, painting, and furniture. Scholarly entries on some three hundred works highlight the various cultural influences and differences throughout this vast region. This groundbreaking book also includes an illustrated chronology, informative maps, and an exhaustive bibliography and is sure to set a new standard in the field of Latin American studies. ]]>
Publisher: Philadelphia, PA : Philadelphia Museum of Art, c2006.
ISBN: 9780300120035
0300120036
9780876332504
0876332505
9780876332511
0876332513

There are no comments for this title yet.