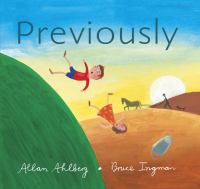 The adventures of various nursery rhyme and fairy tale characters are retold in backward sequence with each tale interrelated to the other. Includes Goldilocks, Jack and the beanstalk, Jack and Jill, the frog prince, Cinderella, and the gingerbread man.
Publisher: Cambridge, MA : Candlewick Press, 2007.
Edition: 1st U.S. ed.
ISBN: 9780763635428
0763635421

A very entertaining way of sharing the familiar fairytales we know. Kids will enjoy seeing how all the stories are connected.

For ages 3-5. What was Jack doing before he climbed up the beanstalk? What were Jack and Jill arguing about before they went up the hill? Find out what your favourite storybook characters are doing before the action begins.

A different way of reteliing some fairy tales by going backward in time. Starts with the three bears looking in a window, then goes "previously...."

It took a little effort to get my four-year-old to process what "previously" meant. It did end up being a fun book eventually and was requested three or four times before returning it.

Learn the prior/former life of several storybook or fairy tale characters. *Great reading for youth that want to know "What the characters were doing before this story?" and "What was their life like before this tale was told ?"

If you think that you know fairy tales such as Cinderella, The Frog Prince, and Jack and the Beanstalk inside and out, think again! You really don’t know them from the very beginning until you’ve read Allan Ahlberg’s new picture book, Previously –a hilarious “romp” which takes the reader backwards through some of our most familiar and beloved fairy tales and nursery rhymes.
What was Jack (of Jack and the Beanstalk) doing before his mother sent him to the market to sell the family cow? Well, he and his little sister, Jill, were climbing up and down a hill with a pail of water – which, as you know, was spilled when they fell. Why did they fall? Here’s the answer – they were too busy arguing over who had to carry that heavy pail of water.
Before their expedition up and down the hill that morning, Jack and Jill were sitting at the table eating breakfast (and arguing over who would claim the prize in the box of cornflakes) when The Frog Prince jumped onto the windowsill and gazed sadly at them. He was still unhappy at being transformed into a frog, having once been a handsome prince in love with a beautiful girl – none other than Cinderella.
Previously that day, Cinderella had met the Gingerbread Boy on the path as he was gleefully escaping from a little old man, a little old woman, a cow, a horse, a butcher, a baker, a group of children and a wily fox.
And so on.
As Allan Ahlberg’s imaginative picture book for children so cleverly reveals, there’s a beginning, or a “previously”, to every story!